This section provides specific strategies to reduce GHG emissions from the procurement, use, and disposal of information and communication technologies (IT), including information services. Specifically, it addresses three subcategories of IT procurement: 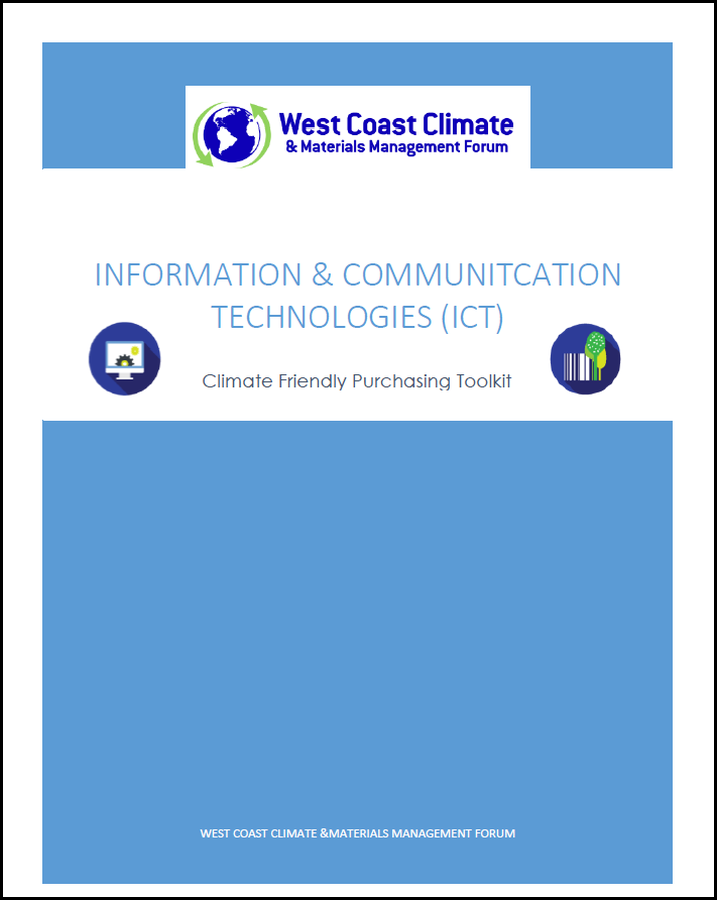 These areas were chosen because they are applicable to a wide range of institutions, there are relatively straightforward strategies that can be replicated across different organizations, and there are good existing models and approaches for measuring GHG emission reductions. Other areas of ICT procurement – such as telecommunications equipment, software licensing, - are not addressed here, but may be developed in future iterations of the toolkit. 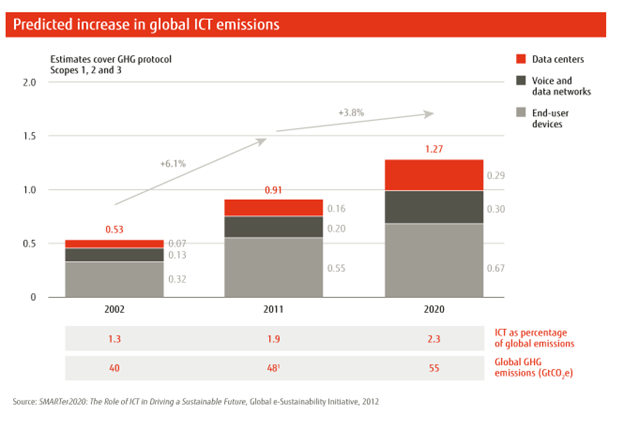 It takes a lot of energy to make this equipment…

For example, a 2010 Fujitsu study found that 40–50% of the total lifecycle GHG emissions of a desktop PC can be produced before it is first used.4 (Life Cycle Assessment and Product Carbon Footprint: Fujitsu ESPRIMO E9900 Desktop PC, Fujitsu, 2010.)Embedded emissions for IT equipment make up a substantial share of the total lifecycle emissions. Carbon emissions from materials and manufacturing range from about 25-75% of the lifecycle total, depending on the product and the assumptions used.

And it consumes a lot of electricity when in use….

In commercial buildings, computers and monitors can make up more than 10 percent of overall electricity consumption of a building. In addition, the vast majority of small-scale servers, workstations, and thin clients are found in businesses. Computers can frequently sit idle for large portions of the day, wasting much of the energy associated with them.

Emissions, like data, are shifting from office equipment to the cloud…

But a big ICT footprint doesn’t mean we should go back to paper… ICT, though it has a big and growing footprint, can reduce footprints in many other operations – document processing (vs. paper), virtual travel (vs. on road), improved logistics, and efficient delivery of services. So key is to keep its footprint as low as possible while still allowing its benefits.

Principles for Carbon Reduction in IT: Demand Reduction & Efficiency

There are two main principles that apply to all the purchasing strategies covered in this section: Demand Reduction and Efficiency.

Demand Reduction is based on the idea of using only the right amount of equipment or service to meet your needs. That means taking the time to understand what is really needed for your organization – does every workstation need the super powerful machine, or a printer on the desk? Is your workforce going mobile, so may not need both laptops and desktops? It also can include increasing the life of existing equipment - the single best way to avoid production-related carbon emissions is to not buy a piece of equipment. In some cases, it may make sense to buy a slightly more powerful (and slightly more expensive) computer or printer so that it can maintain its function for 4-5 years.

Efficiency: This goes beyond simply reducing the amount of power used by a particular piece of equipment. You should also consider how much a product will be used. For instance, a desktop printer that sits idle for much of the day is far less efficient than a large multi-function device that services many people, even though it uses more power. The same is true for servers and data services – you want to ensure you are not paying for servers and server farm services that have not been optimized to run efficiently (e.g. through virtualization).